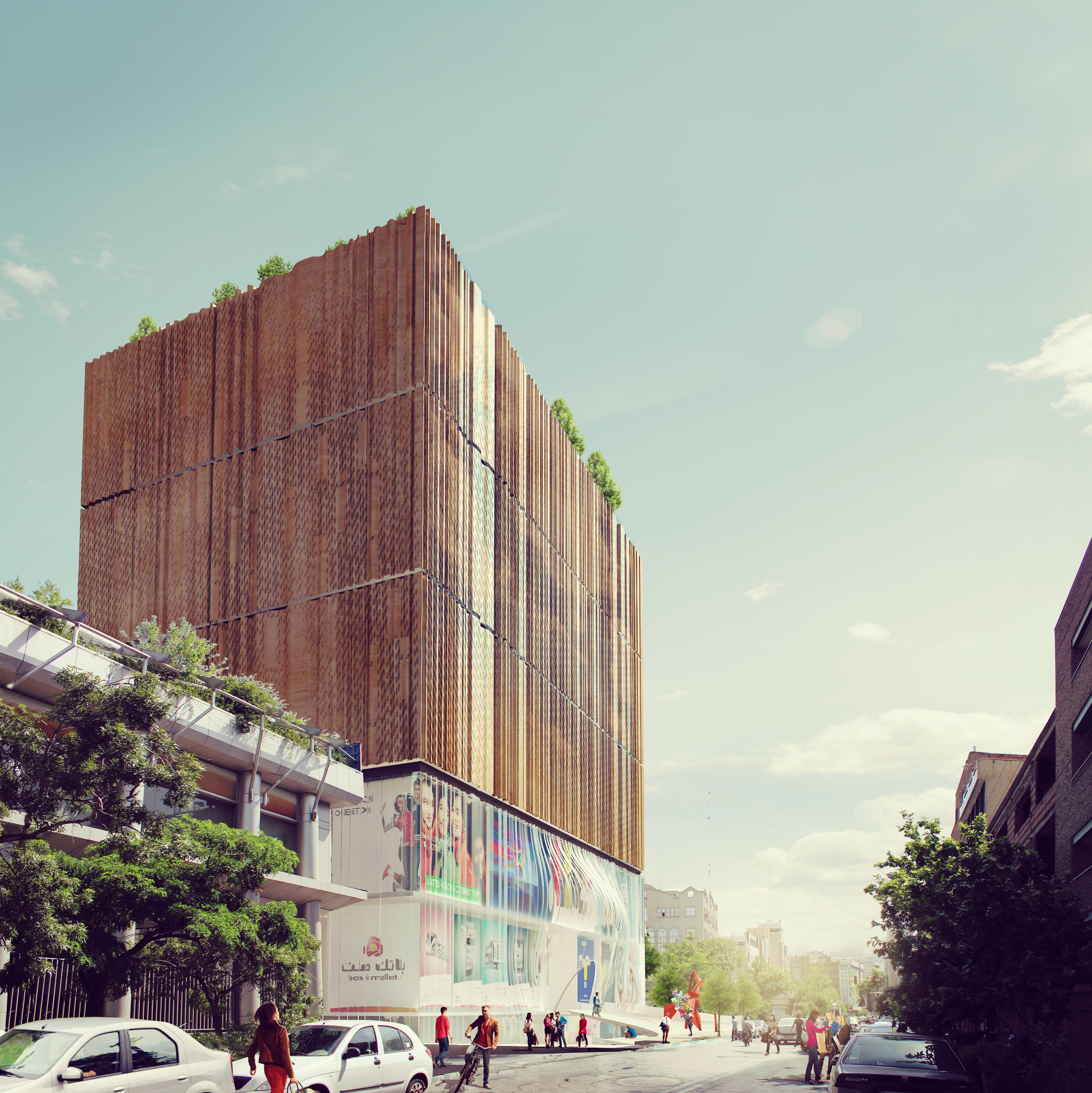 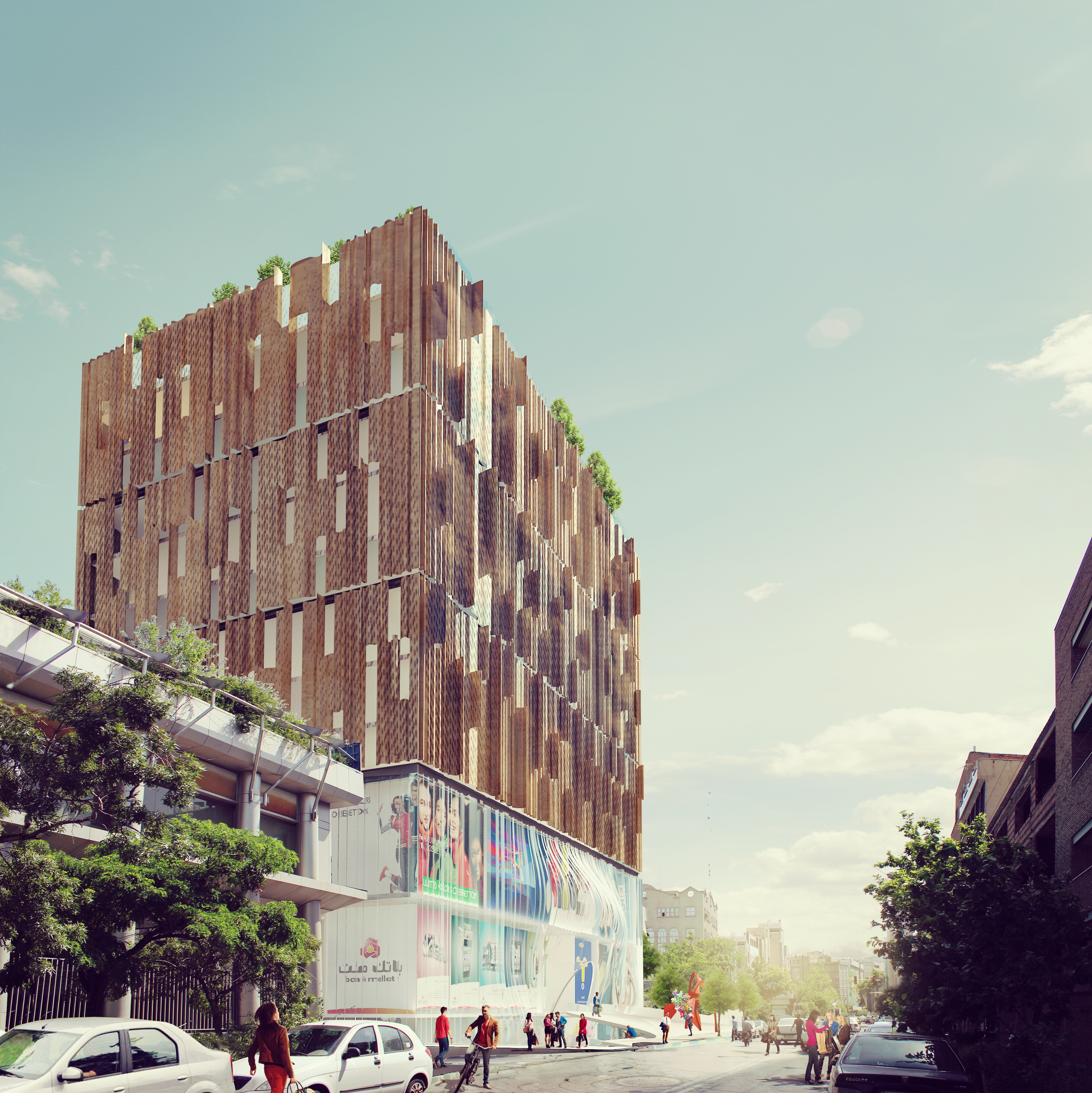 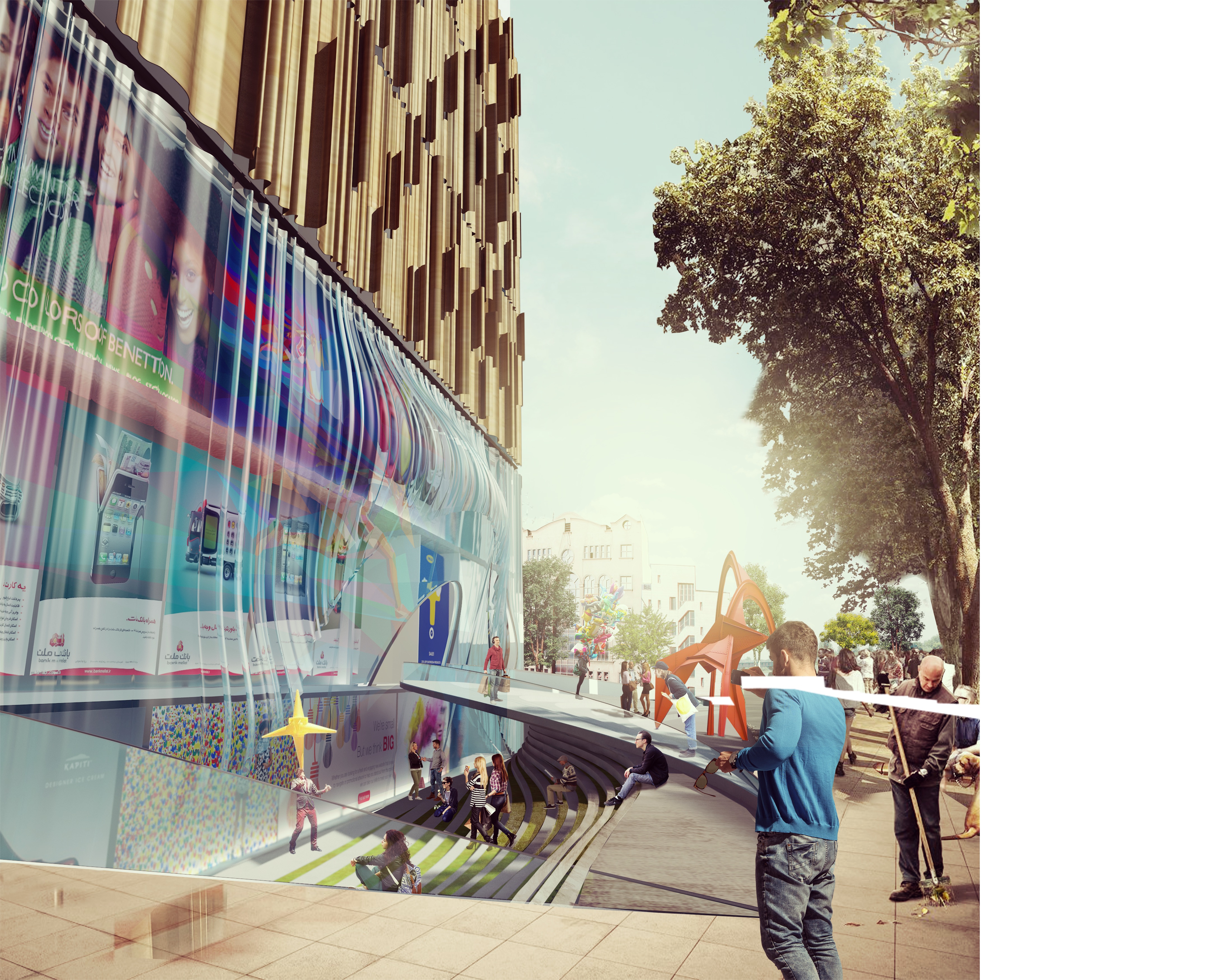 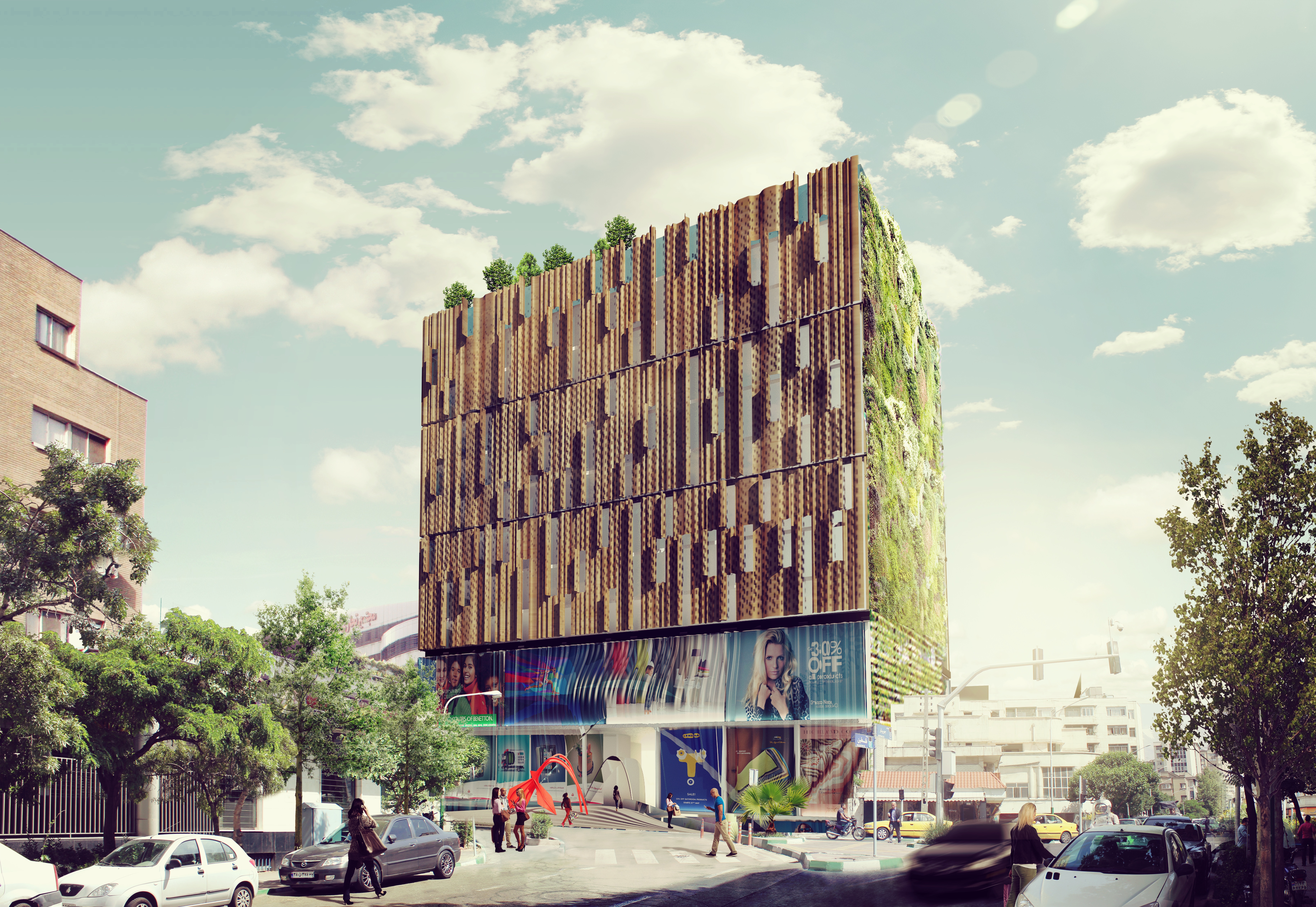 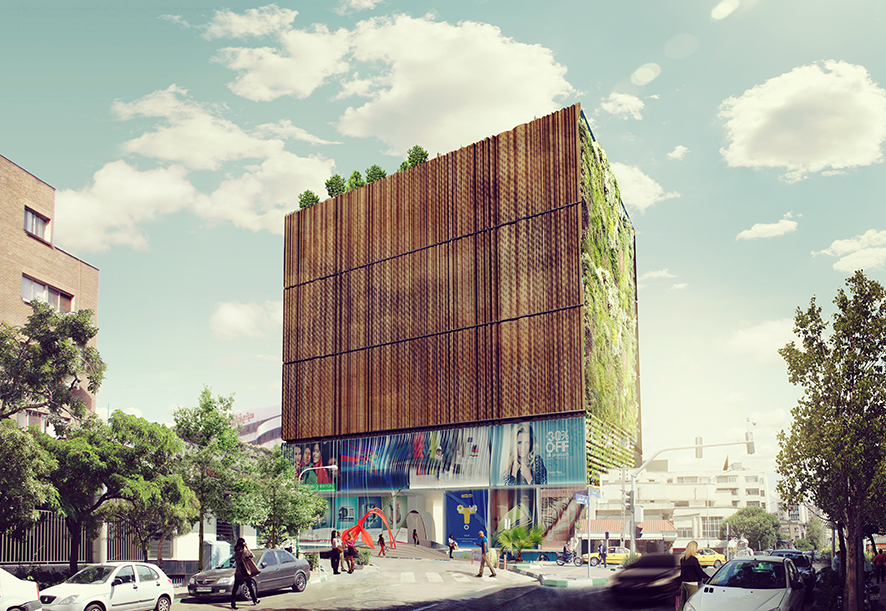 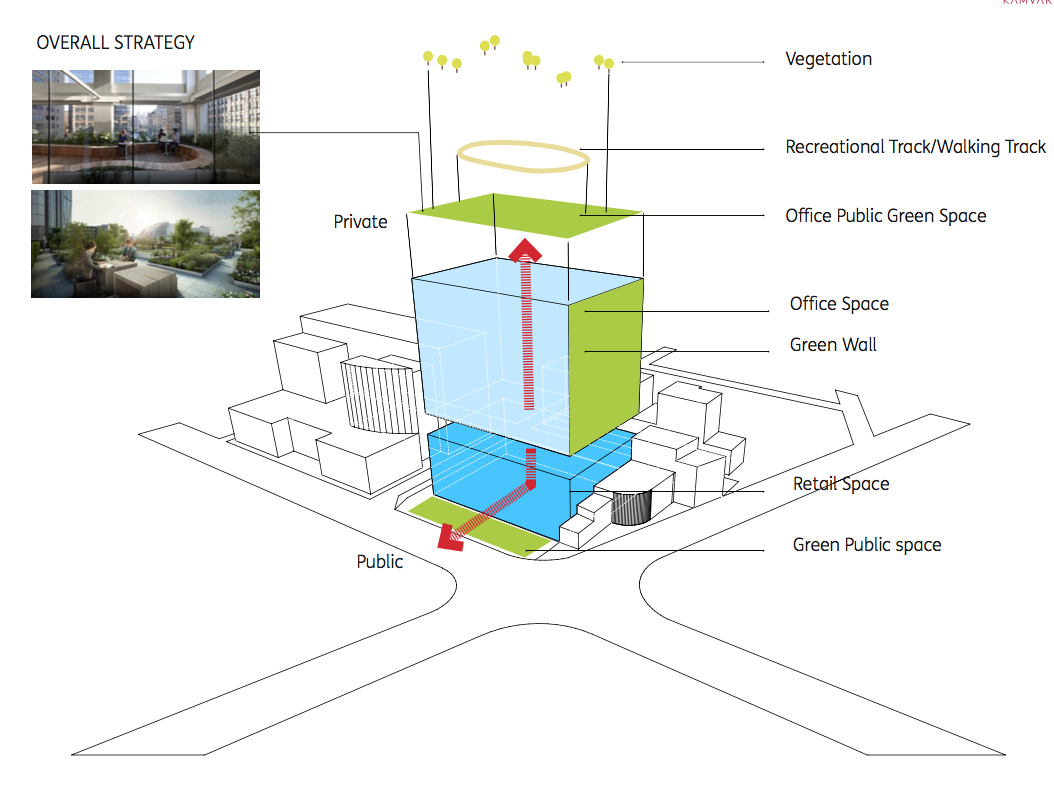 Tehran and Iran has in recent times been the centre of a lot of publicity, the new negotiations hint at this market place opening up both to investment and international consultants.

Kamvari Architects for the best part of the last decade has been actively involved in proposals and projects in Iran, as the only RIBA registered practice with the presence there they have been able to secure a reputation for innovation and design excellence.

We were invited in early 2015 to participate in a competition for a mixed-use scheme in district 6 off Tehran.  The brief required us to produce a building, which contained retail to the base with offices above. The scheme would consist of around 300,000 ft.²

“Tehran deserves an international building, Our Design proposal is driven by the pursuit of excellence, material and sustainable innovation.”

In this case the proposals were strongly influenced by the local context. The  site is located in a region renowned for its fabric and textile shops. The proposal uses racks and stacking as well as hanging drapes as seen within fabric and textile shops as a means of exploring a pre-formative skin and building volume which caters for our client’s requirements whilst allowing for new and innovative architectural and material ideas to be explored.

The building envelope also considers environmental aspects such as solar gains as well as comfort issues such as glare. The building open on three sides has different and specific solar loads in accordance to orientation. In order to combat this issue the louvered facade which has the ability to completely close and open is perforated using a differentiated pattern created using parametric design tools which will reduce overall heat gains on the interior of the building whilst allowing for ample daylight to penetrate the floor plates reducing the need for electromechanical lighting and cooling. The intelligent skin therefore allows the building to build on a long history of sustainable design within Iran and create a building, which will have a reduced energy footprint

In addition to this we catered for a public activity through open space at the base as well as the roof top and utilising dormant surfaces such as the eastern facade(which by planning law has to remain blank in order for the adjacent building to connect to) which would allow to building to become a vibrant addition to the streetscape. The consideration of public Space within a private development such as this for the city of Tehran is a novel idea here  rather than maximising floor space we concentrated on increasing the value of space created by increasing footfall to the retail space as well as creating quality external space for the offices for a formal social environment to be created.

The intention here will be distinguish the building in accordance to its usages while maintaining a coherent look and feel within the context.

The overall aim here is to create a new precedent in terms of quality retail and office space for the city of Tehran. The design greatly influenced by the local region and the long and illustrious history of architecture within Iran, makes every attempt to use advanced designed tools as a means of creating a sustainable and innovative building.