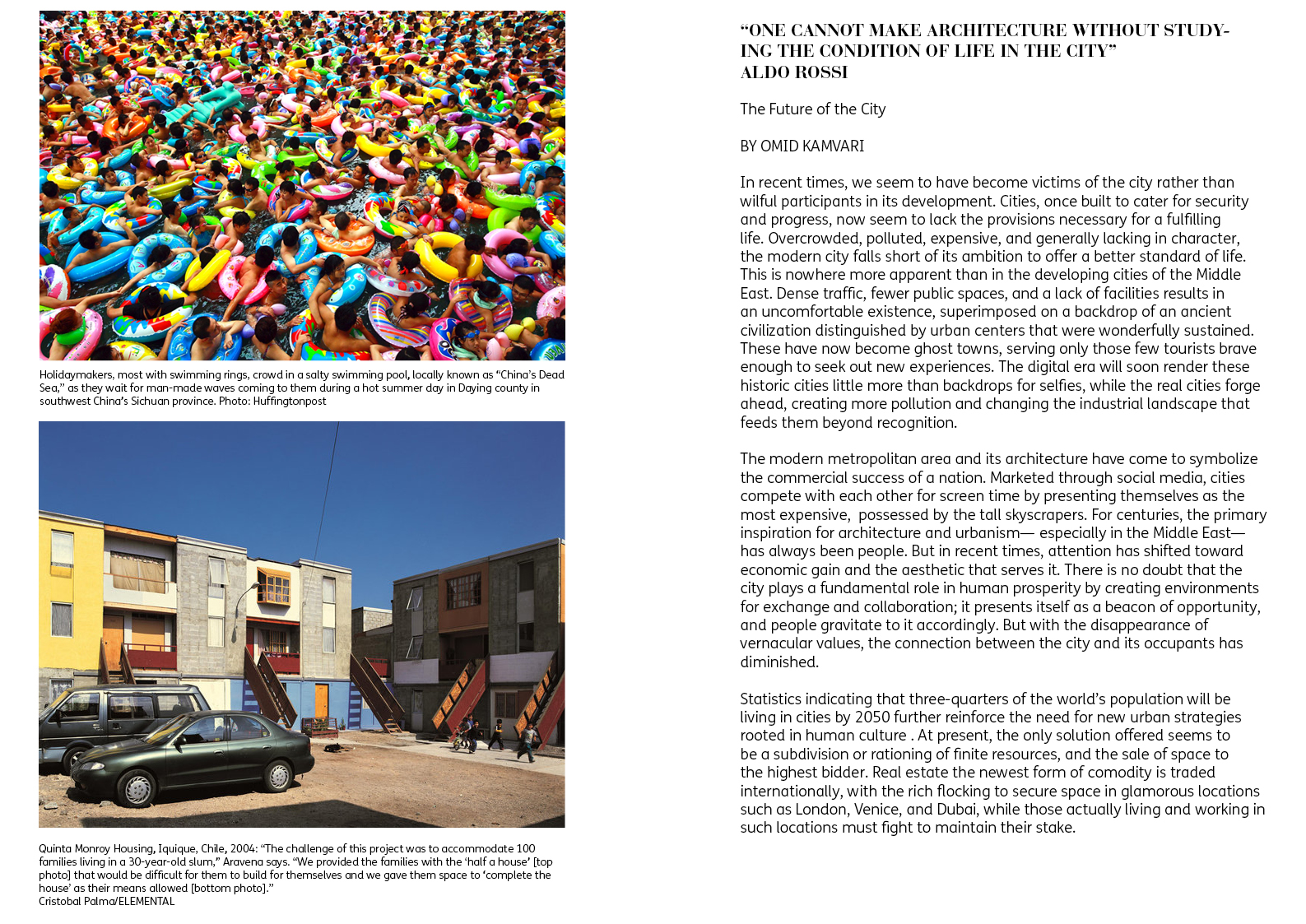 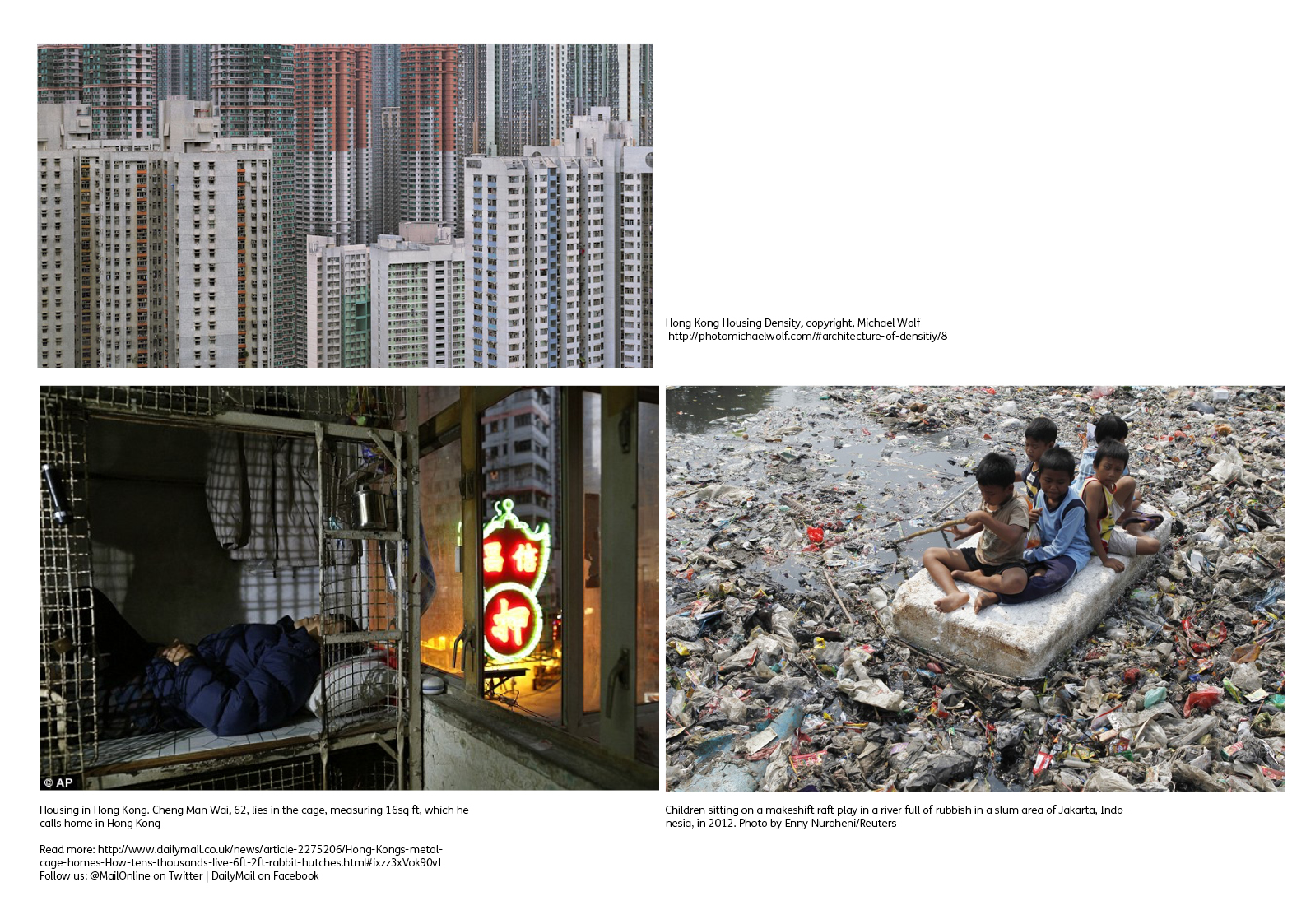 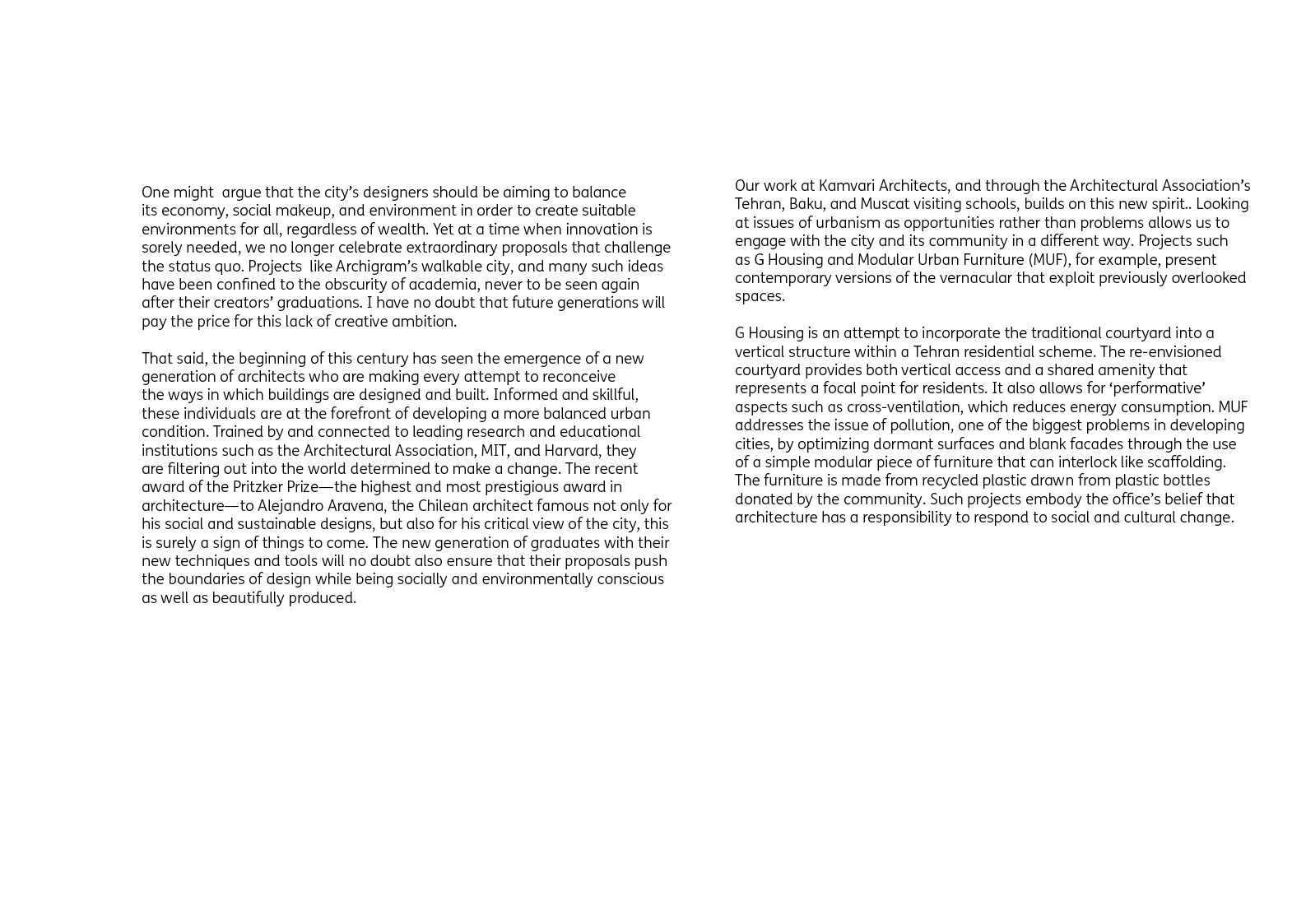 The Future of the City

In recent times, we seem to have become victims of the city rather than wilful participants in its development. Cities, once built to cater for security and progress, now seem to lack the provisions necessary for a fulfilling life. Overcrowded, polluted, expensive, and generally lacking in character, the modern city falls short of its ambition to offer a better standard of life. This is nowhere more apparent than in the developing cities of the Middle East. Dense traffic, fewer public spaces, and a lack of facilities results in an uncomfortable existence, superimposed on a backdrop of an ancient civilization distinguished by urban centers that were wonderfully sustained. These have now become ghost towns, serving only those few tourists brave enough to seek out new experiences. The digital era will soon render these historic cities little more than backdrops for selfies, while the real cities forge ahead, creating more pollution and changing the industrial landscape that feeds them beyond recognition.

The modern metropolitan area and its architecture have come to symbolize the commercial success of a nation. Marketed through social media, cities compete with each other for screen time by presenting themselves as the most expensive,  possessed by the tall skyscrapers. For centuries, the primary inspiration for architecture and urbanism— especially in the Middle East—has always been people. But in recent times, attention has shifted toward economic gain and the aesthetic that serves it. There is no doubt that the city plays a fundamental role in human prosperity by creating environments for exchange and collaboration; it presents itself as a beacon of opportunity, and people gravitate to it accordingly. But with the disappearance of vernacular values, the connection between the city and its occupants has diminished.

Statistics indicating that three-quarters of the world’s population will be living in cities by 2050 further reinforce the need for new urban strategies rooted in human culture . At present, the only solution offered seems to be a subdivision or rationing of finite resources, and the sale of space to the highest bidder. Real estate the newest form of comodity is traded internationally, with the rich flocking to secure space in glamorous locations such as London, Venice, and Dubai, while those actually living and working in such locations must fight to maintain their stake.

One might  argue that the city’s designers should be aiming to balance its economy, social makeup, and environment in order to create suitable environments for all, regardless of wealth. Yet at a time when innovation is sorely needed, we no longer celebrate extraordinary proposals that challenge the status quo. Projects  like Archigram’s walkable city, and many such ideas have been confined to the obscurity of academia, never to be seen again after their creators’ graduations. I have no doubt that future generations will pay the price for this lack of creative ambition.

That said, the beginning of this century has seen the emergence of a new generation of architects who are making every attempt to reconceive the ways in which buildings are designed and built. Informed and skillful, these individuals are at the forefront of developing a more balanced urban condition. Trained by and connected to leading research and educational institutions such as the Architectural Association, MIT, and Harvard, they are filtering out into the world determined to make a change. The recent award of the Pritzker Prize—the highest and most prestigious award in architecture—to Alejandro Aravena, the Chilean architect famous not only for his social and sustainable designs, but also for his critical view of the city, this is surely a sign of things to come. The new generation of graduates with their new techniques and tools will no doubt also ensure that their proposals push the boundaries of design while being socially and environmentally conscious as well as beautifully produced.

Our work at Kamvari Architects, and through the Architectural Association’s Tehran, Baku, and Muscat visiting schools, builds on this new spirit.. Looking at issues of urbanism as opportunities rather than problems allows us to engage with the city and its community in a different way. Projects such as G Housing and Modular Urban Furniture (MUF), for example, present contemporary versions of the vernacular that exploit previously overlooked spaces.

G Housing is an attempt to incorporate the traditional courtyard into a vertical structure within a Tehran residential scheme. The re-envisioned courtyard provides both vertical access and a shared amenity that represents a focal point for residents. It also allows for ‘performative’ aspects such as cross-ventilation, which reduces energy consumption. MUF addresses the issue of pollution, one of the biggest problems in developing cities, by optimizing dormant surfaces and blank facades through the use of a simple modular piece of furniture that can interlock like scaffolding. The furniture is made from recycled plastic drawn from plastic bottles donated by the community. Such projects embody the office’s belief that architecture has a responsibility to respond to social and cultural change.